Step inside a small terrace house in Hayle and you have stepped into one of Alasdair Lindsay's paintings.  The colours are the colours of the late fifties and the early sixties. 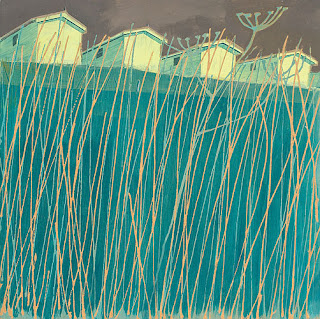 Soft teal, muted pink and ochre are shot with an earthy orange.  Angle poise lamps peer over beautiful retro cups on top of fifties style place mats.  Moulded orange chairs sit around the table and an astonishing collection of vintage surf boards are stacked where most people keep their books.
Alasdair is a self confessed hoarder and collector, he says he gets it from his grandmother.  he finds his treasures at car boot sales and junk shops. 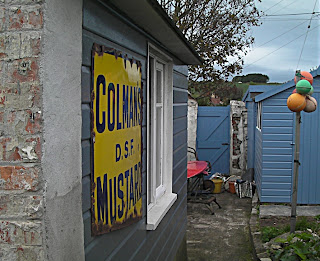 His studio is in a sturdy shed at the bottom of his garden.  Having a very young family he finds a studio at home useful as he can fit work around the schedule imposed by small children.  He usually paints while his eldest daughter is at school. 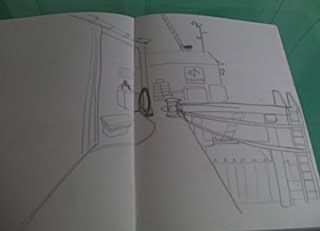 He works from sketches done on location and sketchbooks full of his distinctive linear sketches are stacked in his studio.  He prefers to use these and memory as the basis for a painting.
He says he finds actually starting a painting the most difficult part  Beginning with a coloured ground, this is his way of breaking the ice, he then uses masking tape to make lines and patterns on the colour to break it up.  This forms the commencement of a long process of thin glazes of colour, masking out shapes, more painting and finally a kind of "editing" where he thins out the painting, taking away shapes and elements until he is satisfied with the composition that remains. 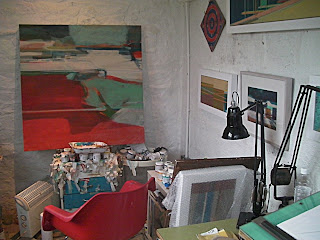 Alasdair's paintings are very carefully considered, at first glance they appear to be very neat flat planes of colour but look closer and you can see the interesting brush work and thin layers going to make up a pallet that is strongly represented by the objects he surrounds himself with.
While working he listens to LP records played on a record player beside the easel.
On the shelf sits a toy batman boat beside a Dynamo label maker and a lovely old lamp. 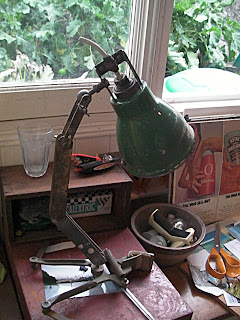 Another shed is literally stuffed with a forest of angle poise lamps and surf boards, he tells me that he sorted out his studio before my visit.  These are usually all around him while he paints.

It is no wonder that his paintings contain the lines and colours of another era.  That, combined with the unusual viewpoints that he depicts, seems to  bestow a serenity onto the paintings, lifting the mundane, and often overlooked, up onto an altogether higher level.  As if the paintings are taking the viewer back to a carefree time, an era when we had time to stop and stare at the patterns made by a crane or a shadow of a boat, or when the shapes of some dried grasses reminded us of our childhood curtains. 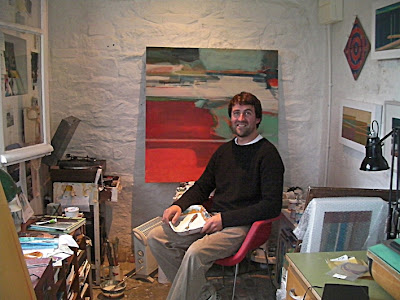 Alasdair Lindsay has made a world of his own through his paintings and one that he is generous enough to share.
Posted by beside-the-wave at 11:47 am