Danny Markey paints the subjects that most of us dismiss as unremarkable, sometimes ugly, often every day.  They are the places and things of an ordinary life, suburban housing estates, a car parked at night, the glow from a television through curtains, cars on the motorway. 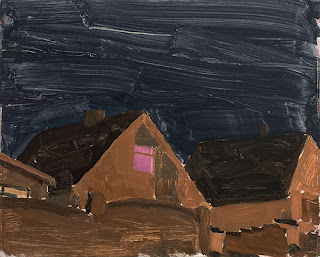 If he paints a beauty spot he is more than likely to include the car air freshener hanging from the mirror or the campervan parked in front. 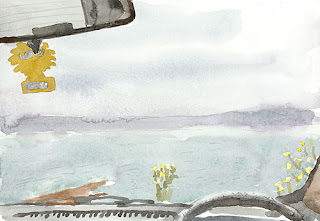 The days in his paintings are often grey and possibly raining.   The nights are of darkness lit by the orange glow of street lights, or by the tail lights of cars as they snake away up anonymous roads.  He enables us to see the world around us and marvel, to relish the colours and shapes, to enjoy the ordinary.  His skill with colour and the confident brushwork is evident in every one of his paintings, they are small masterpieces 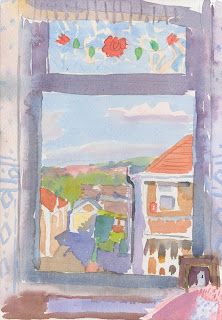 Danny lives in Wales with his wife and four young children, three boys and a brand new baby girl.  He admits to being a little worried that his two older boys are better artists than he is already!  His painting routine depends on where he is working as he works mostly outdoors, the routine is very dependent on subject, painting before dawn or during the night.  His studio is a converted garage at the bottom of the house, it is cheaper and easier with a young family and is useful when doing night paintings.  At the time of this interview however he was dealing with a flood due to the Welsh rain! When he is studio based he uses drawings and outdoor paintings as source material.  He prefers to listen to radio 4 which, he says, makes better background as he finds music is too intrusive for working with. He uses oil and watercolours  by Michael Harding or Old Holland  from Jacksons Art Supplies .  A box made by his father, artist Peter Markey, to work outdoors which opens to create a laptop pallet and a place to slot paintings.  At night he uses a miners LED light around his neck.  Everything is designed to fit into a rucksack.  He works all year round in all weathers!   If he is not working directly outdoors he might well be working in his car. 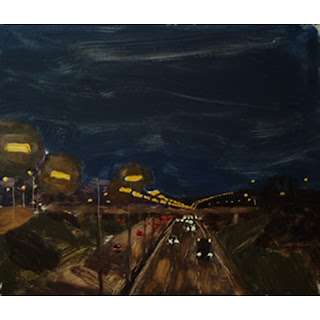 Danny doesn't have a grand plan, he says it is simply about muddling along.  Painting for him is as necessary as breathing, he cannot live without it and if he stops painting he begins to feel unwell. 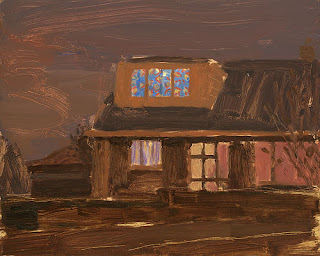 With his paintings he makes a celebration of life, apparently from nothing.  Then gives it to us, the viewers, not on a plate but on a piece of board or paper.  There is no fuss or fanfare, we can take it or leave it, it is simply what he does and, in doing that, we are the richer for it. 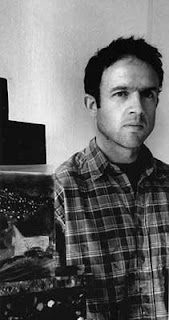 Thanks for shedding some light on the most recent paintings in the gallery. It makes for an interesting read.