In the middle of Penzance, tucked in among the old pubs, houses and shops, is the building that once was the  telephone exchange.  We go in through the front doors, up echoing stairways, through empty hall ways and down a maze of corridors until we reach an unassuming door.  Miles finds the keys and opens up a studio that is truly a reflection of the passion and conviction that goes into his paintings. 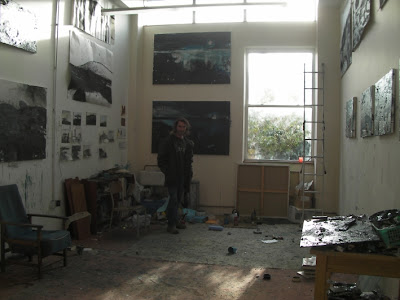 It is a tall light filled room with paintings in various stages up on the walls.  Drawings abound, all over the room, high up near the ceilings,  the gestural and passionate mark making is everywhere.  Dark charcoal lines, dashes and dots, black shapes describe a landscape, roof tops or a church spire, all of them half seen, as if the artist is aware of them but is looking beyond, or looking further. 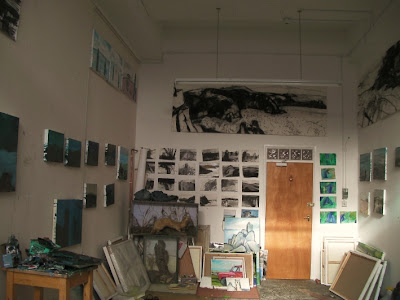 There is a pallet on the floor with the blood of many paintings, reminiscent of a crime scene, evidence of a strongly emotional style of making work. 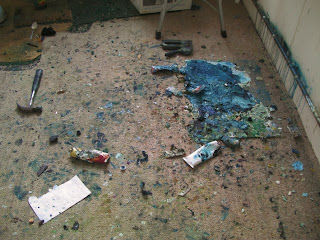 There is also a camping stove and a kettle, matches spent and littering the floor.  Shelves of books about other artists are near a paint splattered sink.  In the other corner several battered boxes hold very old taxidermy subjects, a moth eaten otter and a strange water bird. 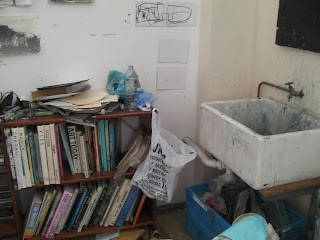 There is nothing neat or pretty about this studio, it is about the work and about the strong ambition that Miles has for himself as an artist, a personal inner drive. He wants to destroy the wall between drawing and painting, they are to be the same. 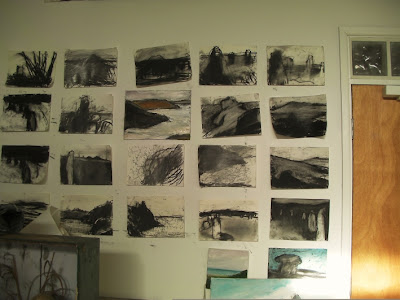 He doesn't have a fixed routine, arriving to paint sometimes before dawn, working nonstop for several hours before allowing himself space from the work.  He has a process that he calls pruning where older canvasses are culled, scraped off and reused or destroyed.
When working  in the landscape he uses large sheets of paper with charcoal, making the occasional little film, which he will later use as part of the process for a painting.  He can't work from photographs as he says they take over too much.
Paintings start life on the floor, he walks around them, "Pollack style" and later they go up onto the walls for further work.  His response to the landscape is personal and meditational, something may have caught his eye, through a clouded window, against a hazy sun, shapes in a velvet night, branches in the snow, all are re written in the hieroglyphics of a secret language. 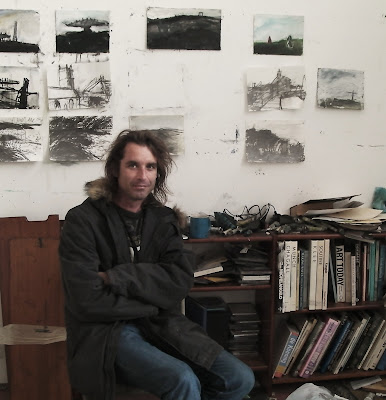 It is a deeply personal space, somewhere that it was a privilege to be allowed to see because Miles Heseltine is a private kind of man, quiet, almost shy, but one who obviously strips his soul bare to transcribe his response to the landscape around him in deep paint and raw canvas, torn through with the powerful, and all important, marks of drawing.
Posted by beside-the-wave at 11:34 am