Arriving at Andrew Giddens studio is like walking through one of his paintings.  Across the beach with the headland bleached out by surf spray.  Up the winding cliff path, salt in the air and the sound of crashing waves. Through a gap in the hedge and into a modest shed perched high on the cliffs. 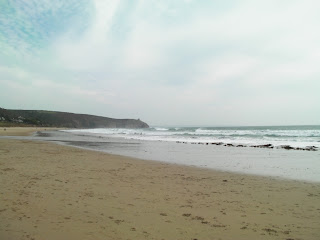 There is nothing fanciful about this studio, this is an honest and straightforward working space.  It is very peaceful and calm.  The windows are open allowing the sound of the surf far below to mingle with the sound of wild birds attracted by the abundant blackberries that graze the walls of the building. 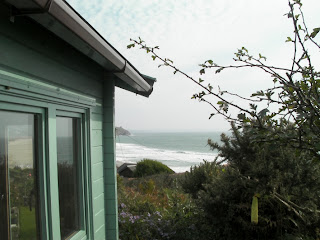 There is a large easel  with a painting of Porthleven in progress.  Paint, in the soft greys and subtle yellows of his paintings,  covers everything, 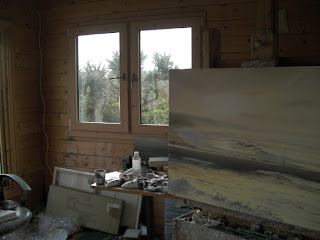 the old office chair could have been upholstered by Jackson Pollock. 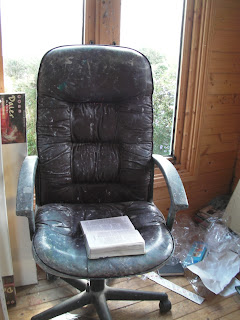 There is a table laden with tubes of oil paint in various stages of use, some are split open to use the last scrapings, a pallet, which appears to be an old bread board has transformed into a grey, three dimensional landscape.  He uses Old Holland oil paint because the high pigment content makes them useful for glazing, Daler Rowney because of the buttery texture.  There are very few brushes as he says he forgets to clean them and so he prefers to paint with a knife and his fingers. 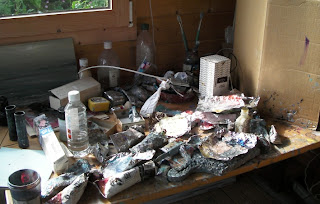 Sketchbooks lie open on the floor beside a comfortable arm chair with glimpses of vigorous drawings and new blank canvasses are stacked by the walls ready to be transformed into Andrews atmospheric paintings. 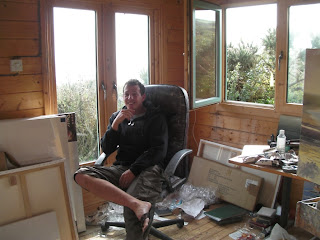 Andrew has worked here for four years, his working day starts at 8.30 and he paints until about 1pm.  Although he sometimes breaks this habit to give his three boys their maths or science lessons.  In the afternoon he has time with the boys, walking on the beach and exploring the stretch of coastline that is home to them.
This family time seems to be one of the fundamental elements of Andrew as an artist as he explains more about his painting methods.
The relationship that he has with a place is intimately bound together with memories and experiences.  Time spent with the important people in his life is wound, with paint, into the beauty of the scenes that he depicts.  He finds it almost impossible to paint somewhere until his children have run across the sand, or he has walked along the cliff paths and they have spent many happy hours exploring together.  He can paint places that he knew well in his childhood and places that he is discovering with his own children now.
I suspect that if you wanted Andrew to paint your favourite beach you would have to take him on holiday with you for quite a few years! 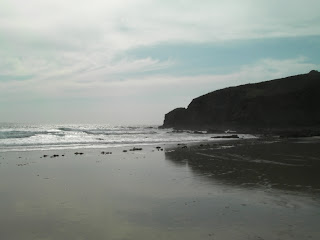 There is nothing fanciful about Andrew as an artist, like his studio, he is honest and straightforward.  He paints what he sees and it seems as if he sees with his heart wide open.
Posted by Sarah at 6:50 pm